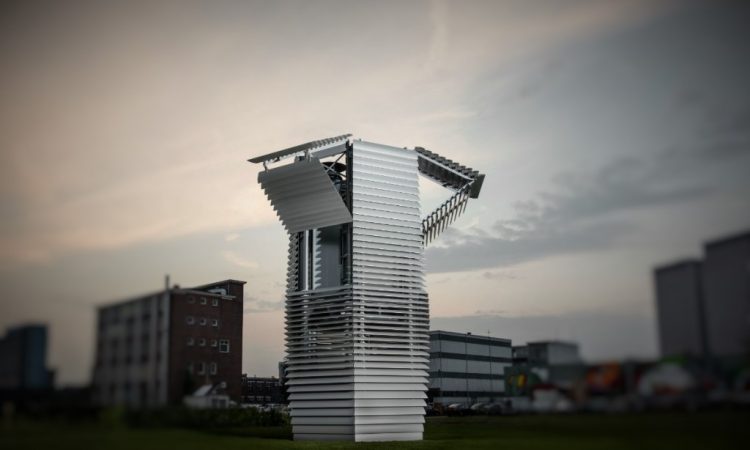 “Clean Air for Everyone”

On the 4th September 2015, a seven metre tower was erected in Rotterdam, Netherlands. This acts as a vacuum cleaner for the air, removing harmful pollutants and other contaminants. Today it provides a surrounding park and playground with air that is 75% cleaner than the rest of the city. In the next few months another tower has been approved for construction in Beijing. Dutch designer Daan Roosegaarde and his studio teamed up with experts in air purifying technology to launch a product he considers to be “the beginning of the future”.

The tower works as an air vent by taking in polluted air and removing any impurities before releasing it back into the environment. It has the capacity to purify 30,000m3 of air per hour using no more electricity than a water boiler – approximately 1,400 watts. According to Studio Roosengarde “the technology used in ‘The Tower’ is the same as that used indoors in hospitals, so it’s safe and tested”.

After polluted air is sucked into the vents it is collected and transformed. Roosengaarde’s team found that 42% of the collected smog particles were made of carbon which can be compressed into ‘smog free jewellery’. Each piece of jewellery contributes to the purification of 1,000m3 of polluted air.

‘The Tower’ belongs to The Smoke Free Project which hopes to be a ‘sensory experience of a clean future’ rather than just a final local solution. It is now open for the public to view at Vierhavenstraat 52 in Rotterdam, and from there will travel the world. It is estimated that around 16,000 people have already participated in the project.

If you are concerned that air quality may be a relevant consideration to your development, or wish to discuss other novel ways of reducing pollution, then please get in touch with us today.