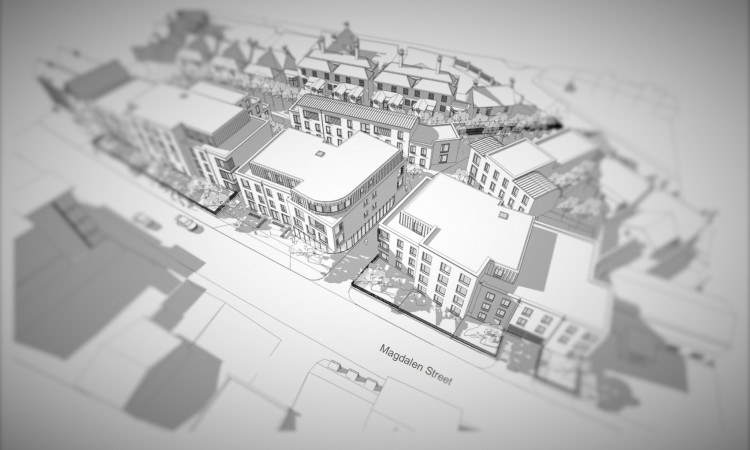 Redmore Environmental was instructed to undertake an Air Quality Assessment in support of a new student accommodation complex located on the site of an old bus depot on Magdalen Street, Colchester. The proposals included 230 student bedrooms in separate apartments, spread across five buildings.

The development presented a challenge for the team here at Redmore Environmental. The proposal site was located in a built up area of Colchester, with many buildings located directly adjacent to the street. When roads are bordered by buildings or walls in this way, it leads to the development of street canyons. These prevent dispersal of pollutants and often result in areas of poor air quality. Liaison with Colchester Borough Council highlighted concerns that construction of the student accommodation at the selected location would lead to the development of further street canyons, resulting in increased pollutant concentrations at existing residential properties across the road from the site, and in the apartments themselves.

The team reviewed the existing building layout and compared it to the proposed topography on Magdalen Street should the development go forward. This comparison identified that canyons were already present as a result of the existing bus depot. Therefore, it was necessary to compare how the geometries would change based on the proposed urban landscape.

A dispersion modelling assessment was undertaken in order to quantify differences in pollutant concentrations with the current and proposed canyon parameters. A number of sensitive locations were identified in the area where there urban topography would be altered. This meant that the predicted air quality conditions could be directly compared between the two scenarios at specific locations. Review of the results revealed that levels at many of these locations would decrease if the development went forward. A detailed look at the canyon parameters using mapping software led the team to conclude the decrease in concentrations was likely to be due to the student accommodation buildings being set further back from the road than the existing depot. This resulted in a wider street canyon with a greater volume for pollutants to disperse within, and therefore lower overall concentrations.

The dispersion modelling results were also plotted across the accommodation site in order to consider if pollutant levels were below the government standards at the student apartments. Visualisation of this data revealed that some of the flats would be exposed to elevated pollutant concentrations. The team liaised with the client on this issue, leading to changes in the building design. These changes meant a smaller number of residential units would be exposed to poor air quality. The units which remained in areas where pollutant levels did not meet the relevant standards were specified for mitigation.

The project at Magdalen Street serves as an example of the teams’ adaptive thinking and commitment to each individual job. This assessment spanned over several months and required a ‘think outside of the box’ approach, as the standard methodology was not suitable for the scheme. This tailor made method led to the report being accepted by the Colchester Borough Council’s Environmental Health Officer.

If you are concerned about air quality issues associated with your development, do not hesitate to get in touch and discuss a unique approach suited to your needs.