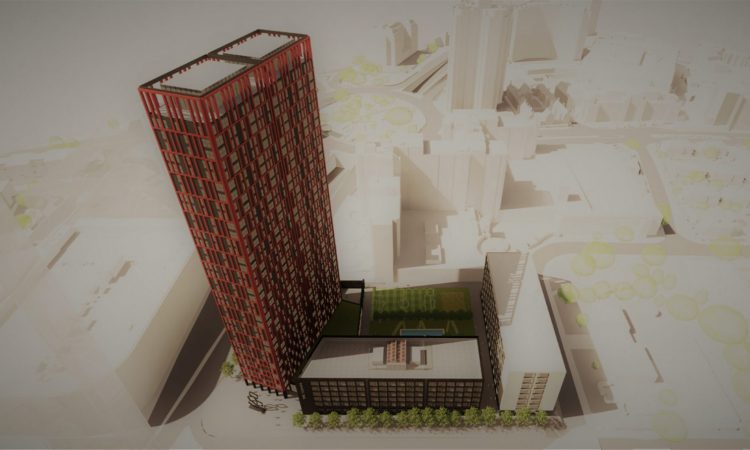 Redmore Environmental was instructed to undertake an Air Quality Assessment in support of a planning application for a residential-led development on land at Ryland Street, Broad Street and Grosvenor Street West, Birmingham. The proposals included the demolition of the existing buildings and subsequent development of a 35 storey tower providing residential apartments alongside an eight-storey hotel.

The site was located within an Air Quality Management Area, declared by the Birmingham City Council due to high pollution levels. The proposed development therefore had the potential to result in the exposure of future occupants to poor air quality, as well as causing air quality impacts during both the construction and operational phases. As such, an Air Quality Assessment was undertaken to determine pollutant levels at the proposed site, assess impacts from the development and ensure that air quality was appropriate for future occupants.

During the construction phase of a development there is the potential for air quality impacts as a result of fugitive dust emissions. These were assessed in accordance with the Institute of Air Quality Management guidance ‘Assessment of dust from demolition and construction‘. Following the analysis, it was concluded that good practice control measures would reduce dust emissions to an acceptable level during the relevant work phases.

Vehicle movements to and from a site can lead to increases in pollutant levels at sensitive locations. The scheme did not include provision of car parking spaces, however it was identified that future occupants would instead use a number of nearby car parks. Four sites were located in the vicinity of the scheme, equidistant to the development and comparable in cost. As such, it was considered likely that vehicle owners would use all of these car parks, rather than favouring a particular venue, allowing for effective traffic distribution across the highway network.

A dispersion modelling assessment was carried out using ADMS-Roads in order to determine the potential for future occupants to be exposed to poor air quality. During review of the local area it was noted that, upon completion, the Midland Metro Westside Extension will run along Broad Street. The new line would alter the road alignment adjacent to the proposed scheme with the existing carriageway moved to the east, away from the site. As such, vehicle exhaust emissions would be released a greater distance from the building façade and the potential for exposure of future occupants may decrease. At the time of assessment, the exact re-alignment could not be determined and the existing road geometry was used as an alternative. This provided a worst-case representation of conditions as pollutant concentrations were likely to be over-estimated and ensured comments raised by Birmingham City Council during consultation were addressed.

The dispersion modelling results indicated that predicted concentrations were above the relevant criteria at the proposed building façade fronting Broad Street, from ground to third floor level. As such, mitigation in the form of mechanical ventilation was recommended to ensure a supply of clean air for residential units at these locations.

How Can We Help?

If you require an Air Quality Assessment to support your planning application, or would like to consider how alterations to road geometry may affect air pollution in your local area, then please get in touch with a member of the team today to find out how we can help you.